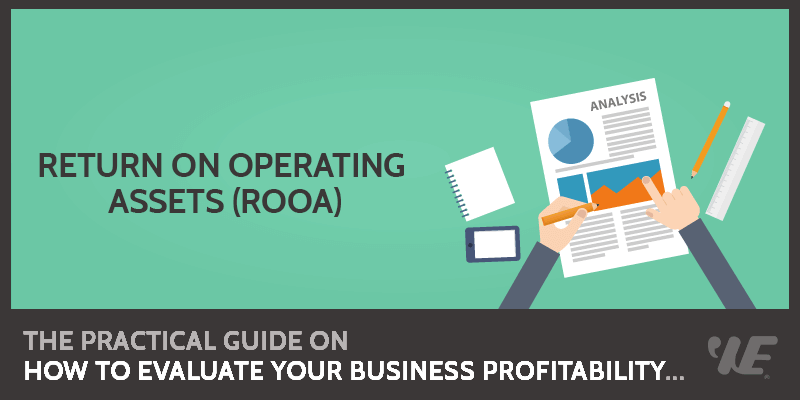 This is a detailed guide on how to calculate Return on Operating Assets (ROOA) with thorough interpretation, example, and analysis. You will learn how to use this ratio formula to assess a company's profitability.

Definition - What is Return on Operating Assets?

ROOA is like return on assets (ROA); the only difference being that ROOA only includes the assets that are involved in running the business (operating assets), while ROA includes all assets of the company.

ROOA allows management to understand which assets are required for business operations, and which can eventually be eliminated.

The equation for ROOA is as follows:

To compute the equation, you take a company’s net income and you divide it by the assets that are used to create revenue.

Suppose Company ABC has $100 million of total assets, with an estimated $65 million of operating assets.

Using the above equation, ROOA is calculated to be 18.4%. This means that the company generated 18% of its operating assets value in net income.

Company ABC generating 18% of its operating assets as net income is not incredibly efficient.

Therefore, management may look for alternative ways to increase its operational efficiency.

For example, they may attempt to purchase more proficient machines, or acquire technology that will allow them to recoup a larger percentage of their operating assets as net income.

But analyzing a company’s efficiency is not the only advantage of using the ROOA ratio.

By splitting up its assets into two categories—operating and non-operating - the company gets a better picture of which assets could potentially be eliminated down the road.

Eliminating the non-operating assets would shift the company’s focus on its money-making assets, and make the operations of the company considerably more efficient (its ROOA would increase).

ROOA does not come without its shortcomings. Deciding which assets are considered operating assets is subject to interpretation.

There is no fool-proof way of choosing the assets that help create revenue; every company can do it in a different way.

Therefore, it is vital that each company utilizes engineering experts to decide which assets play direct roles in producing revenue. But even with a team of experts, the results can vary.

So, when analyzing the ROOA to evaluate a company’s efficiency, remember that the denominator of the ratio may not be fully representative of all the company’s operating assets.

Therefore, look at various financial ratios to obtain a clearer picture of a company’s financial health and efficiency.