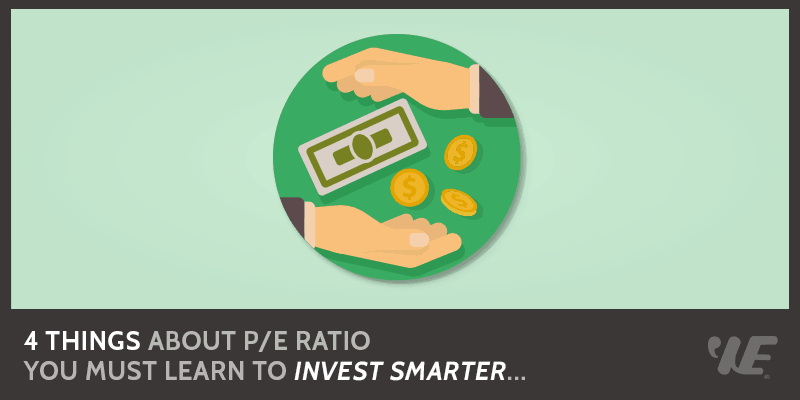 4 Things You Must Know About P/E Ratio

Part of becoming a successful value investor involves familiarizing yourself with everything there is to know about the Price to Earnings (P/E) Ratio.

What does P/E ratio mean? The simplest definition describes it as an analytical tool for helping to evaluate a stock’s worth, by dividing its current share Price by its per-share Earnings.

The P/E ratio is sometimes used to pinpoint when a company has become overvalued or undervalued, but there are four key points you should know about it before you attempt to incorporate it into your own value investing strategy.

1. The P/E Ratio as a Valuation Tool

A stock’s P/E ratio, also known as its price multiple, is easy to calculate, and describes exactly how much money investors are currently willing to pay for each dollar of a company’s earnings.

Generally speaking, investors will pay more for a company that offers better returns and growth prospects, and a higher P/E ratio reflects this.

If you compare P/E figures for the same business over a period of time, or the figures of similar companies at the same point in time, or even the P/E ratio of one company to that of the market as a whole, you can theoretically assess when a stock has become overvalued or undervalued in the eyes of the market.

But does the P/E ratio alone provide enough information to arrive at a useful conclusion?

Just how practical this tool really is in measuring the value of a stock remains a highly-debated topic in the investing world.

Although stocks trading at high or low P/E ratios have a tendency to eventually drop, or rise back up, to their industry norms, this doesn’t always happen.

Because of this, some analysts have concluded that these ratios are simply not reliable enough to determine the movement of stock prices, and subsequently, whether a company’s shares should truly be considered overvalued or undervalued at any particular point in time.

Quite often, the P/E ratios at which various stocks become undervalued varies considerably depending on circumstances, and on a number of other valuation factors.

American investing guru Warren Buffett doesn’t appear to put much faith in P/E ratios as a useful indication of a stock’s value.

This is most likely because evaluating a company’s P/E ratio alone doesn’t provide the investor with enough practical information, without first determining and comparing it to the company’s intrinsic value.

In fact, once you’ve put the time and effort into calculating the intrinsic value of a stock – and you should – its P/E ratio tends to become rather irrelevant.

If you compare the inherent worth of a company to its current stock price, you’ll already have a good sense of where its earnings fit into the bigger picture, and whether or not it’s currently undervalued, overvalued, or right on the money.

But as a means of testing the waters of a potential stock investment, P/E ratios can still play a meaningful role in the assessment process.

Many investors continue to claim that the P/E is a highly useful analytical tool.

The key, they say, is to use it wisely and effectively, and in conjunction with other available information about a company’s performance.

So just what is a good P/E ratio?

There really is no one-size-fits-all answer to that question.

You may ask whether a P/E ratio of 12 is good or bad, for example, and the answer could be either, depending on the circumstances.

In other words, all 12s are not created equal for the simple reason that multiple companies may have the same earnings level, but different measurements for determining whether that level is significant or not.

For instance, in trying to evaluate a company’s P/E ratio by comparing it to that of other companies, you could run into the problem that one company’s earnings, while at the same level as a number of others, should be accorded a higher intrinsic value because they are above average for that individual business.

Or alternatively, they could represent a lower value because they are the result of taking on too much debt.

Similarly, if a company’s future earnings prospects are better than average, its earnings level should warrant a higher degree of value than that of a less promising business with the same earnings.

It’s also widely recognized that different industries within the stock market tend to trade at different price multiples, depending on what the real or perceived growth potential is for a particular sector.

And even the very earnings figures themselves can skew P/E ratios from business to business, since different companies may use different accounting procedures to arrive at their earnings results.

As you can see, the P/E ratio is not as straightforward a comparison tool as it would initially seem, since the benchmark you use for your analysis can significantly affect your assessment.

Most experts suggest that, to avoid misinterpreting the information provided by a stock’s P/E ratio, you should not only examine it over a prolonged period of time, you should also consider it in relation to the company’s projected earnings estimates, and to the economy as a whole.

There is another ratio known as the PEG (P/E to Growth) that attempts to incorporate the value of a company’s prospective EPS (Earnings per Share) growth into the mix, in order to give a more complete picture of the comparison between various company P/E ratios.

Generally, if two similar businesses within the same industry have the same P/E ratio, the one with the lower PEG ratio may represent the better buy, since it has the higher level of expected growth.

Finally, there are several important points you should always keep in mind when evaluating P/E ratios:

The very nature of a company will contribute to its average P/E ratio, by virtue of the fact that some businesses require more hard assets to generate cash flow than others.

The expense associated with purchasing a long-term asset like a manufacturing company’s factory, for example, can be spread over a number of years, or capitalized.

But less tangible and more immediate cash flow-generating expenses, such as the investment of funds into product research and development, must be offset in full each year against a company’s annual income.

Because of this, businesses like drug development companies will always tend to show lower earnings, and subsequently higher P/E ratios, than some other types of companies.

2. Sale of a Business or Other Large Asset

A company’s reported earnings for a given year can be significantly affected by the sale of one of its associated businesses, or some other large asset.

It’s important that you determine whether company earnings are high, and the resulting P/E ratio has become attractively low, because of increased earnings from regular business operations, or simply because a one-time event has led to an artificial earnings gain.

If it’s the latter, you’ll need to subtract the proceeds from the asset sale before calculating the company’s P/E ratio, in order to arrive at a more normalized figure.

3. Restructuring of a Business

In the same way that the sale of a large asset can cause a company to report an artificially inflated earnings amount, the restructuring of a company can result in a temporary earnings decline.

A restructuring charge is the one-time cost that a business incurs when it undergoes reorganization to improve its operational efficiency.

Whether this charge encompasses closing down factories, laying off employees, relocating operations or writing off assets, it represents an expense that often drags a company’s earnings down, and causes its P/E ratio to rise.

Adding the restructuring charge back into the mix will help to offset its artificial effect.

It’s important to recognize that there are two types of P/E ratios: the trailing P/E, and the forward P/E.

Because the earnings of most companies increase year by year, the forward P/E is almost always lower than the trailing P/E, and it can be very easy for an investor to get caught up in the excitement generated by analysts predicting an attractively low future P/E ratio for a particular stock.

Always remember that trailing P/E ratios are based on reality, while forward P/E ratios involve conjecture, and in some cases, pure optimism.

Stocks that are considered by the market to be cyclical, meaning their earnings go through regular, sometimes predictable, periods of increases and decreases, will require extra careful analysis before you invest.

Don’t make the mistake of thinking that buying shares in a cyclical company when its P/E ratio is low is a good time to get a bargain since this is actually the worst time to invest.

Businesses such as airlines, for example, tend to generate higher earnings when the overall economy is strong and consumers have more disposable income to spend on indiscriminate travel.

But very high earnings usually indicate that a cyclical company’s business is poised to drop off, and you would do better to time your purchase based on comparing the stock’s current P/E ratio with that of its next predicted earnings peak.

Stock valuation ratios, such as the P/E ratio, must be handled with care in order to make effective use of the information they provide.

As we’ve discussed, the best way to benefit from price multiples is to use them as comparison tools, in conjunction with the study of other financial and operational information about the company in question.

You can choose to benchmark a company’s P/E ratio against a similar company within the same industry, against the market as a whole, or against its own historical performance.

But remember that each of these strategies comes with its own set of limitations.

In comparing similar companies, for example, P/E ratios can vary due to differing financial structures, risk levels, and growth rates.

When comparing one stock’s P/E ratio to the overall market, these structural and operational variances only increase due to the variety of industries represented.

But if you’re evaluating the P/E ratio of a relatively mature and stable business, you’re likely to find that comparing its price multiples over a prolonged period of time will actually provide you with some reasonably valuable information.

Established companies with a history of consistent growth, and relatively reliable future business prospects, provide the best opportunity for confidently assessing whether today’s relatively low P/E ratio is worth getting excited about.

Solid companies tend to grow steadily over the years, and the long-term average of their P/E ratio offers a good foundation for comparison.

And although you’re likely to find that some significant change in the company’s business outlook has affected its intrinsic value, and caused that decrease in its P/E ratio, now and then you’ll come across an investment with real potential: one that has simply fallen out of favor temporarily, and whose market price has dropped accordingly.

As a value investor, you should be wary of indiscriminately basing your stock valuations on P/E ratios alone.

At the same time however, price multiples do have their place in the overall scheme of things, and they can be useful when implemented correctly.

As initial indicators of companies that may warrant further investigation, P/E ratios can serve as quick, convenient, and invaluable analytical tools.

At the very least, the P/E ratio offers a far better measure of a company’s cash flow situation than studying its revenues alone, and a more current source of information than its book value.

6 Worst-Case Stock Buyback Scenarios That Will Affect Your Returns