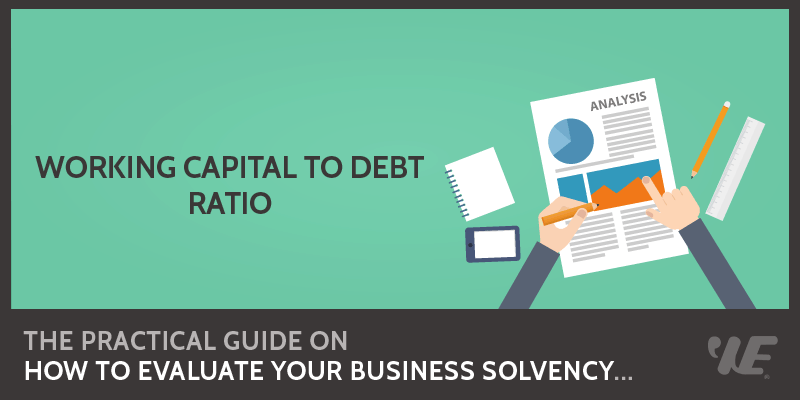 This is an in-depth﻿﻿ guide on how to calculate ﻿Working Capital to Debt ratio with detailed analysis, example and interpretation. You will learn how to utilize this ratio's formula to evaluate a firm's solvency.

Definition - What is Working Capital to Debt Ratio?​

A financial ratio known as the working capital to debt ratio can help you to evaluate a company’s ability to reduce or eliminate its debt.​

The higher the ratio value, the more positive a feature this capability becomes for any business you may wish to invest in, since it’s generally considered a sign of good financial health.

By comparing a firm’s working capital with the amount of its total debt, you can determine just how quickly and easily that organization could liquidate its cashable assets to repay its debt obligations, should it ever become necessary.

Even though such a drastic step would only be considered under the most extreme circumstances, since it would effectively eliminate all of a company’s working capital (WC), the working capital to total debt ratio is still considered a highly significant ﻿﻿﻿measure of ﻿﻿debt coverage.

To calculate a company’s WC to debt ratio, you would use the following formula:

The current assets represented by a firm’s working capital would include any cash, cash equivalents such as marketable securities, accounts receivable, and inventory.

Current liabilities would include accounts payable, as well as any other short-term debts coming due within the next year.

You should note that, while the working capital figure is based on current amounts, the WC to total debt ratio considers a company’s total debt, including both short-term and long-term obligations.

​Okay now you know the formula for debt ratio, let's consider this example to you can understand clearly how to find debt ratio.

Perhaps you already hold stock in Company Y, and there’s been a recent economic downturn within its market industry.

You’d like to get an idea of just where Company Y currently stands, in terms of being able to pay off its creditors in a worst-case scenario.

When you study Company Y’s most recent financial statements, you’re able to gather the following information:

By using these figures and the formula given above, you can easily calculate Company Y’s working capital to total liabilities ratio, as follows:

In this simplified example, you can see that Company Y still has just enough wor﻿﻿king capital to repay its loans, should it become necessary.

Given the economic situation, this would likely be viewed as a very positive financial position.

As with most debt coverage ratios, a result of 1 (100% coverage) or higher is the most desirable outcome for a company’s working capital to total debt ratio.

This shows that the business in question would be capable of immediately paying off all the money it owes to creditors, were it to liquidate all of its working capital.

When the net working capital to debt ratio is less than 1 however, it may be a sign that a company is over-extended financially.

While this is not always the case, and there are circumstances where a lower ratio value is warranted, it’s always best to investigate further.

No financial ratio calculatio﻿﻿﻿n should be taken at face value on its own.

There is one note of caution when using the WC to debt ratio as an evaluation tool in your stock investment analysis.

Because inventory is not generally as liquid as cash and accounts receivable, if a company is inventory-heavy, and has a slow turnover rate, its ability to use its working capital to quickly pay off debt will be both exaggerated and unrealistic.

You may also find it useful to include only a firm’s short-term debt in the working capital to total debt ratio calculation, since this would more accurately reflect the amount of immediate debt coming due.