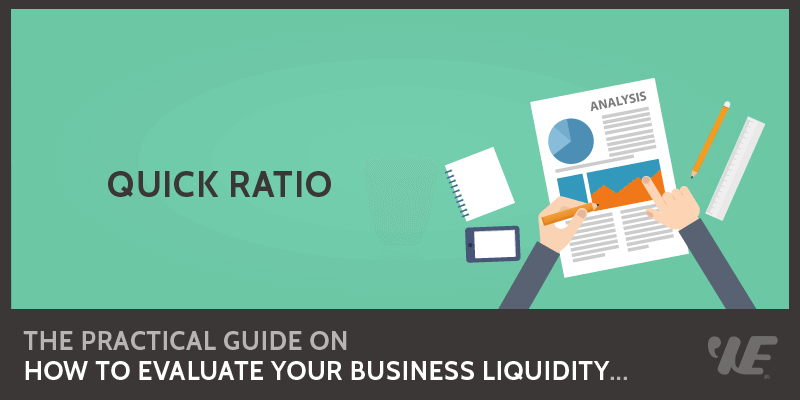 This is an ultimate﻿﻿ guide on how to calculate ﻿Quick Ratio with detailed analysis, interpretation, and example. You will learn how to utilize this ratio's formula to assess a business liquidity.

Definition - What is Quick Ratio?​

As one of the many ﻿﻿﻿﻿﻿﻿financial ﻿﻿ratios you can use to analyze a company’s financial standing and performance, the quick ratio will help you to gauge a company’s asset liquidity.

This particular liquidity ratio is also known as the acid test because, historically speaking, acid was at one time used to differentiate pure, valuable gold from worthless metal.

By measuring the combined total of an organization’s cash and cash equivalents against its current liabilities, you can determine its abil﻿ity to fund its short-term debts using only those quick assets that can be easily converted into cash.

Similar to the current ratio, the higher the quick asset ratio value, the better a position the company is in.

The figures you’ll need to compute the quick assets ratio can usually be found on a company’s balance sheet.

The quick ratio is a simple formula that’s calculated by first adding up a company’s cash-on-hand, and any other cash equivalents such as accounts receivable amounts, short-term investments, and marketable securities.

This total is then divided by the company’s current liabilities, as in the following example:

​So how to find quick assets?

It’s important that you only include assets that are liquid in the short term, and accounts receivable amounts that aren’t too far past due.

If for any reason, you find that the company’s financial statements don’t provide a complete breakdown of its liquid asset amounts, there is another way you can use the acid test ratio formula.

In this alternate version, you would simply subtract the company’s inventory amounts and current prepaid assets from its current asset total, as in the following example - here's another formula for quick ratio:

Now let's have a look at an example so you can understand clearly how to find this ratio in real life.

Let’s say you’d like to assess Company A’s liquidity, or its ability to support its short-term debts.

Using the quick ratio formula described earlier, you can plug in the appropriate figures, like so:

Note that in most cases, the inventory is not considered a quick asset.

As you can see, if the quick asset ratio were equal to 1, it would mean that Company A’s liquid assets were equal to its current liabilities, and the business would be in a position to pay off its short-term debts if it became necessary.

Because the result here is actually 1.07, it tells you that Company A has more than enough liquidity to support its current liabilities.

​Okay now we're done with the quick ratio calculation, let's find out how to use this ratio to assess a company's liquidity.

When the acid test for a company reveals that it does indeed have the liquid resources to pay off its short-term debts, it means it won’t find it necessary to s﻿ell off any of its long-term assets to meet its current financial obligations.

This is a positive situation because most organizations use their capital assets to generate income.

Not only could the need to sell these assets harm a company financially, it would also indicate to investors that the business isn’t capable of generating enough revenues from its regular operations to support its debts.

We can see that a higher quick asset ratio value generally equals a higher level of liquidity.

But if the accounts receivable amounts used in your calculations aren’t due for some time, and the ﻿accounts payable figure contributing to the current liabilities amount is due right away, this particular ratio may not accurately reflect a company’s current state of liquidity.

In this case, you would be better off using the Cash Coverage Rat﻿i﻿o instead.