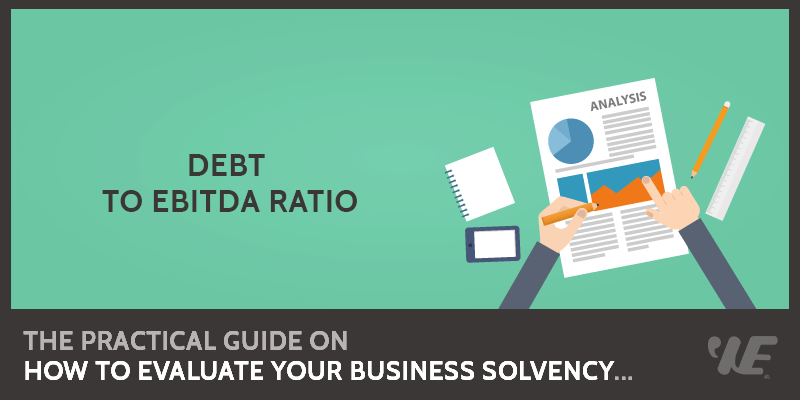 This is an advanced guide on how to calculate Debt to EBITDA Ratio with in-depth interpretation, analysis, and example. You will learn how to use this ratio's formula to assess a firm's debt settlement capacity.

Definition - What is Debt to EBITDA Ratio?

Any creditor wants to accurately assess the risk posed by a potential borrower in order to determine whether it is willing to make a loan at all and if so at what interest rate.

Credit rating agencies responsible for monitoring public companies must periodically evaluate creditworthiness, and moreover must do so based on publicly-available information (unlike a creditor, which can request specific data on a loan application).

Investors can use a company's capacity to service its debt as one measure of financial stability, and by extension management performance when deciding whether to invest.

In short, the likelihood that a given company will default on its debt is a key measure for many interested parties.

One of the financial measures used to assess the risk of default is the debt to EBITDA ratio.

For your information, EBITDA stands for Earnings before Interest, Taxes, Depreciation, and Amortization.)

But when EBITDA is measured on an annual basis (as it normally is), the ratio also provides the approximate number of years required to pay off current total debt.

Now that you understand what this ratio is about, let's have a look at its formula.

The debt to EBITDA ratio formula is quite simple. You can calculate this ratio by taking a company’s total debt and then dividing it by the EBITDA.

This data is usually derived from the company's 10-K or 10-Q filing financial statements.

Total debt will be found on the balance sheet; EBITDA can be easily calculated from the income statement, although it is such a standard measure that it may be presented somewhere within the financial statements, such as in the footnotes.

These totals are found respectively in the long-term liabilities and current liabilities sections of the balance sheet.

To examine how this measure works, let’s consider some real-world examples.

For example, you are looking to evaluate Alcoa Corporation’s ability to service its debts. After doing some research, you find that this company has $1.45 billion in total debt and its EBITDA is also $1.45 billion.

By using the given formula, we’ll arrive at the Debt/EBITDA ratio of 1.00

This is an unusual example in that total debt and EBITDA happen to match exactly.

Now let’s consider another Debt / EBITDA example. This time we’ll use this ratio to evaluate several companies so you can learn how to effectively use this ratio in real life situations.

After looking into these companies’ financial statements, you find the following information:

As you can see, these four well-known companies have very different debt to EBITDA ratios.

Alcoa and U.S. Steel are in the same industry segment, but Alcoa has a far more favorable debt coverage position whereas U.S. Steel is in the “danger zone,” which should be no surprise considering the well-publicized tribulations that the American steel industry has suffered.

By comparison, we have two well-known technology companies; while Facebook has about half the EBITDA of Alphabet, it also carries no debt, but Alphabet has such a strong EBITDA that even with almost $4 billion in debt its ratio is fractional.This also brings us to a imperative consideration in analyzing debt to EBITDA ratios: industry segment matters.

Comparing the ratios of companies in different industries is not appropriate given the differing capital structures across sectors.

Manufacturers such as Alcoa and U.S. Steel require capital-intensive assets such as factories and heavy equipment to operate, whereas technology companies have much less demanding fixed asset requirements.

In general terms, a debt to EBITDA ratio up to 3 is acceptable; a ratio of 4 to 5 indicates elevated risk.

And a ratio above 5 indicates significant financial difficulties and the strong likelihood that the company will be unable to borrow additional funds.

From a balance sheet perspective, a capital-intensive company like Alcoa generally has fixed assets that offset the debt it has assumed.

And if, for example, the company has taken on debt to expand its production capacity, it is reasonable to expect that future revenue (and therefore EBITDA) growth will probably cover the increase in debt.

If, however, such a company is using debt to provide working capital, the increase in debt will not be balanced by a corresponding increase in fixed assets, degrading the condition of the balance sheet.

Needless to say, this would be a significant red flag to a creditor or investor.

Since technology companies like Facebook and Alphabet have significantly lower fixed asset requirements, debt (if any) is often used for acquisitions.

As our examples show, Facebook has no debt, while Alphabet, which does, is well-known for acquiring existing companies.

To add another industry example, pharmaceutical companies do require manufacturing facilities, but such companies must also invest heavily in research and development which may or may not yield marketable drugs.

In short, it is important to dig into a company’s financial statements and other information to determine exactly what the purpose of its debt is.

It is also important to evaluate how the debt to EBITDA ratio is changing over time.

If the company has used debt to leverage growth, the ratio should decrease over time as the debt is paid off, earnings increase, or both.

If the debt has been used to provide operating capital, or the company's growth initiatives were unsuccessful, the ratio is likely to steadily increase—a bad sign.

A ratio that remains steady is not necessarily negative; it may indicate that the company’s management is using leverage to fuel growth while keeping debt at manageable levels.

In summary, the debt to EBITDA ratio is an important measure of a company’s financial health.

However, as with any financial ratio, this one number in isolation provides only limited information.

It is always important to evaluate multiple ratios and then to look at the story behind those ratios to fully assess a company’s financial condition.