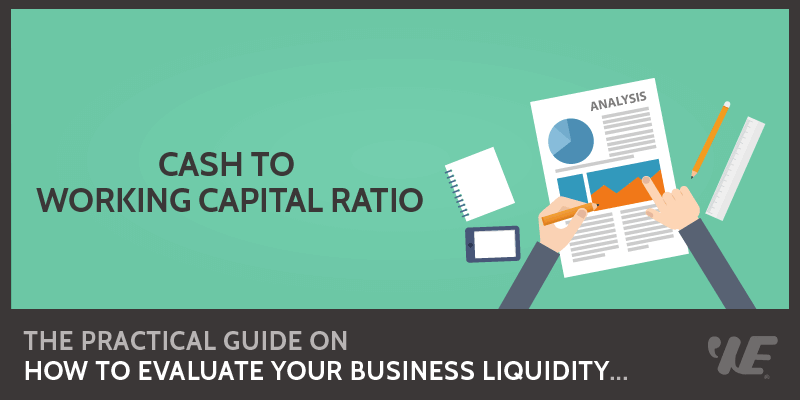 This is a complete guide on how to calculate ﻿Cash to Working Capital ratio with thorough interpretation, analysis, and example. You will learn how to use its formula to assess a firm's liquidity.

Definition - What is Cash to Working Capital Ratio?​

As a method for further defining a company’s ability to fund its short-term liabilities, the cash to working capital ratio is another useful tool that’s available to you for evaluating a potential investment.

When you analyze what percentage of a firm’s working capital (WC) is derived from its cash and any cash equivalents, such as marketable securities, you’ll get a far more refined picture of just how liquid the company truly is.

By ignoring any current assets that can’t immediately be converted into cash, you effectively eliminate the possibility that certain short-term resources, such as receivables and inventory, might require a longer lead time to be collected or sold.

This can affect how likely a business is to be ﻿able to service its current debts.

The formula for determining the proportion of a company’s working capital that’s derived from its cash holdings is as follows:

It’s important to note that, for the top half of this particular ratio, you should only include those assets that are strictly liquid in that they can be quickly and easily converted into cash.

Generally, this refers to any resources that can be liquidated within a month’s time.

Let’s consider an example to illustrate the value of the information provided by the cash to net working capital ratio.

Your analysis so far has shown that Company H seems to have a pretty healthy level of liquidity, but you’d like to further investigate these findings:

When we calculate Company H’s cash to WC ratio, it looks like this:

You can see that, although Company H’s total working capital is impressive overall, the amount of current assets that are represented by ready cash is not quite as inspiring.

With its slow inventory turnover, Company H could have trouble remaining liquid enough to meet its short-term commitments.

If the ratio is low, it could mean the company will have trouble supporting its short-term debts because of a lack of cash.

In this case, you’ll want to consider the results in light of additional information that’s available to you through other financial ratios.

An example of this would be further evaluating the company by calculating exactly how many operational days, or expense ﻿﻿coverage days, it’s capable of funding with its current cash situation.

You should keep in mind the importance of timing when implementing the cash to working capital ratio as a tool for comparing a company’s various reporting periods.

For example, monthly events such as payroll or large accounts payable check﻿ runs can significantly impact the amount of cash a business has on hand at any point in time.

If you were to measure a firm’s cash to WC ratio immediately before a large payout, both its level of cash and its ratio value would be higher than they would be just afterwards.

In other words, the inherent timing of any large, regular cash expenditures can drastically skew the results of an organization’s cash to WC ratio.

To get a better valuation result, you should consider using this ratio with other liquidity assessment ratios, such as the ﻿s﻿ales to ﻿working capital﻿ ﻿r﻿atio.