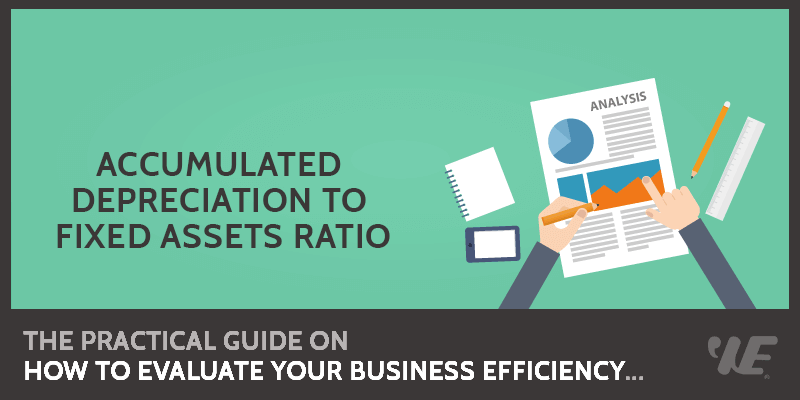 This is a detailed guide on how to calculate Accumulated Depreciation to Fixed Assets Ratio with thorough analysis, example and interpretation. You will learn how to use its formula to measure how well a company is utilizing its assets.

Definition - What is Accumulated Depreciation to Fixed Assets Ratio?

The accumulated depreciation to fixed assets ratio will give you a sense of how frequently a company replaces its assets.

Accumulated depreciation is the natural decline in value that an asset experiences over the years.

When you buy a new car, it steadily loses value even if you take care of it.

So this isn’t a measure of what condition the assets are in but simply how recently they’ve been replaced.

If the ratio is high, it would suggest the company hasn’t invested in new assets in a while.

And one possible reason for that is that there isn’t enough cash to invest. So it is an important measure to have.

The formula for calculating this ratio is really simple. You simply divide the amount of accumulated depreciation by the total value of fixed assets:

You can find both of these figures on a company’s balance sheet.

Okay now let’s consider an example so you can see how this ratio works.

So what was their accumulated depreciation to total fixed assets ratio in each year?

Let’s start with the previous year:

That makes a ratio of about 13%. Now let’s find this year’s ratio:

This year’s ratio has gone up to about 15%. So despite investing in new assets, the accumulated depreciation to fixed assets ratio has increased.

This higher ratio could suggest that they are not investing enough. Their assets are still depreciating faster than they are being replaced.

Granted, that increase would be a lot more than just 2% difference if they hadn’t invested anything in new assets.

And such a small change is certainly no reason to go into a panic.

But it is still a sign that depreciation is happening more rapidly than the company is replacing old assets.

It's important to understand that the accumulated depreciation to fixed assets ratio does not represent a loss of actual cash.

No money is being taken from their account as a result of depreciation.

Depreciation reflects the change in the resale value of a given asset. Think back to buying a car.

Just because you can't resell it for the same price you paid for it doesn't mean any cash is being taken out of your wallet.

So what that means is that a higher accumulated depreciation to total fixed assets ratio is not a sign that the company is losing money.

It just tells you they aren’t investing in new assets. In the worst case scenario, that’s because they don’t have the money to do it.

But there are other reasons a company might hold out.

For example, a company might simply be calculating depreciation to be much higher than it is.

The company might also own a large amount of long-term fixed assets that are depreciating but also don't really need to be replaced.

In other cases, old assets and their depreciation may just be left on the books even though they aren't actually there anymore.

So this can give you a rough idea of the ratio of old to new assets, but you should not take it by itself as a sign that the company is failing to invest in new assets.

Fixed Assets to Net Worth Ratio